Fertiliser – Why do we need it, how is it made and who trades it?

Every time a crop or animal product is exported from a farm, nutrients, notably nitrogen, phosphorus, potassium and sulphur have been removed from the farm and its soils.

To sustain current and future productivity, the nutrients need to be replaced by applying fertilisers. The most common fertilisers are nitrogen based with granular urea being the most common nitrogen-based fertiliser used in our agricultural systems.

In the last 50 years global crop production has expanded threefold. Without fertilisers to increase farm productivity to feed the world, vast areas of additional land would have needed to be converted from natural eco systems like rain forests into agricultural production.

As populations continue to grow, and with higher yields of food per hectare of land are required and more nutrients must be replaced to maintain sustainable land use.

Urea is a globally traded commodity and with over 50% of urea traded as seaborne freight.

For Australia and South East Asia region, the demand for urea on an annual basis is approximately 2 Mt and 24 Mt respectively.

For Australia and NZ, the majority of granular urea is currently imported, predominantly from the Middle East, South East Asia and China. Domestic production totals less than 0.5 Mt with production sites in Queensland, Australia and North Island, New Zealand.

How is urea made?

Fertilisers are made from natural resources. The world’s most common fertiliser, granular urea is made up of 46% nitrogen (1 tonne of urea contains 460 kg of nitrogen). 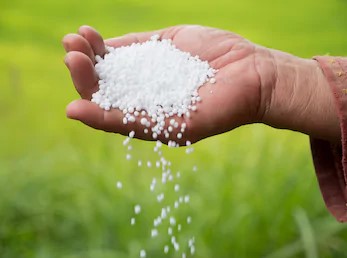 The most common way of producing granular urea is to convert natural gas from its main constituent, methane as follows:

The process for the LCEP is similar though, the syngas LCEP produces is higher in hydrogen than natural gas, so has a different process to create the hydrogen mix. The stages after that are identical.

Once produced, granular urea is transported to farmers to replace the lost nutrients and improve crop production.